Point and figure (p&f) charts provide a simple, yet disciplined method of identifying current or emerging trends in stock prices. This brief guide aims to familiarise the investor with the basic concepts behind p&f charts and highlights some of the benefits from using them in one’s investment procedure.

The balance between buyers and sellers

P&F charts map out the relationship between supply (created by sellers) and demand (created by buyers) at different price levels.

The objective of a p&f chart is to identify the points at which established supply/demand relationships change (these are known as “breakouts”). These changes will very probably lead to a future significant move in the stock price.


What makes p&f charts so different?

There is no doubt that point & figure charts look very different from the now more common chart formats such as bar charts but with a little effort one quickly appreciates their simple yet effective approach – “point & figure charts shout where other charts merely stutter”. Notable features are as follows:

Our web site generates both the p&f charts and the resultant signals for you (and we e-mail you when a signal changes).However, it is important to have an understanding of how p&f charts are constructed. The following exercise aims to demonstrate how p&f charts develop and highlights just how quickly patterns emerge.

Stock charts use a semi-logarithmic scale so that price formations remain appropriate at different levels.

The classic scale is as follows:

For indices, we generally use a fixed scale which is selected by balancing the necessary sensitivity with the efficacy of signals produced.


For breadth indicators and other oscillators with scales from 0% to 100%, we use a fixed 2% scale i.e. using a 3 box reversal it takes a 6% move to reverse the indicator.

Whilst we are fully acknowledge the warning ‘past performance is no guarantee of future performance’ support and resistance levels emerge as patterns showing how investors have actually behaved at certain price levels – ie the price at which demand for a stock outstrips supply (price ‘support’) and the price at which supply outstrips demand (price ‘resistance). A breach of these expected levels is important in signalling a new trend.

An examination of long term p&f charts will often reveals levels at which stocks consistently find support (we reduce the display size of Xs and Os to do this). We refer to these levels as “green zones” from which we will be actively watching for new p&f bull trends to emerge since the next price moves are, on past performance, likely to be upward . We look for further confirmation such as selling climaxes (particularly if on high volume) and evidence of insider buying. 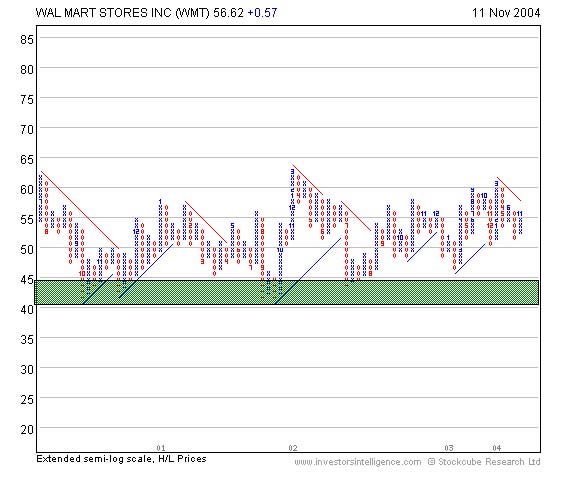 Conversely, stocks reaching areas where they consistently find resistance are known as “red zones”. These are levels at which caution should be exercised, since the next price moves are, on past performance, likely to be downward. Here we would initiate a stop loss policy to limit our losses. 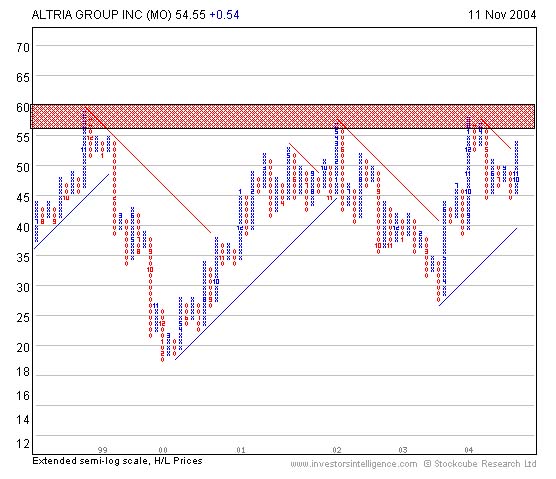 Trend lines are very important in point & figure analysis. The saying that ‘the trend is your friend’ is certainly true.

Stocks above their bullish support line should be assumed to be in long term uptrends.

The line does not connect points and can therefore be drawn immediately when an uptrend begins. It is drawn from the lowest point made after the completion of a bear trend or a significant down move. It is always drawn at a 45 degree angle, intersecting ascending corners of the squares on the chart.

Long positions should be considered while the stock is above the bullish support line.

A break of a bullish uptrend line (that has been in place for a considerable amount of time) is considered to be a bearish event.

The bullish uptrend line for Cisco (shown below) has been in place since 2002.

By November 2004 (date of the chart) the stock has retraced below the bullish uptrend line and although there is a great example of horizontal support shown by four down columns of Os reversing back up at the same level. 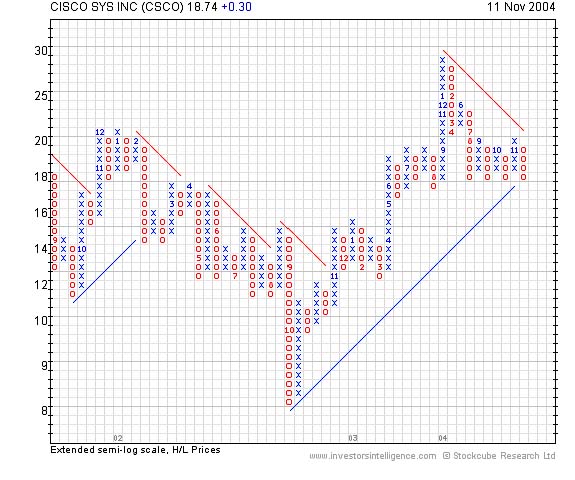 Stocks below their bearish resistance line should be considered to be in long term downtrends.

The line is drawn from the highest point on completion of a significant uptrend and is extended downwards at an angle of 45 degrees as far right as possible.

Short positions should be considered while the stock is below the line and any buy signals given below this line should be disregarded.

A break of the bearish resistance line is considered to be a very bullish event.

In the chart of Bristol Myers Squibb below, the price has remained below the bearish resistance line since December 2001. In February 2004, it failed again at the line. 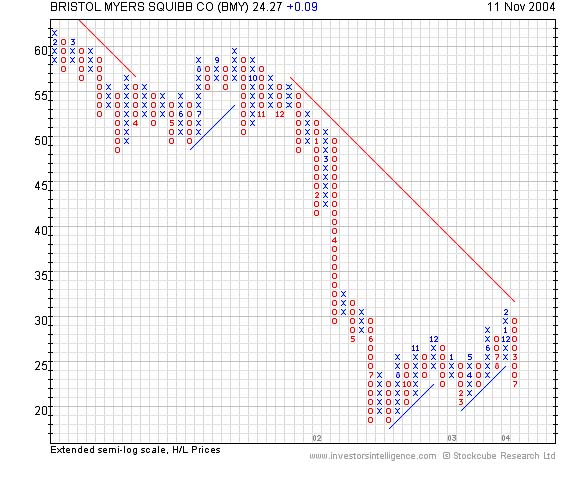 Movement of stocks, to a greater or lesser degree, is influenced by the trends of the headline market indices and it is often said that “a rising tide lifts all boats”. Relative strength charts aim to eliminate this market factor providing a more accurate way of comparing a stock against its peers.

The relative p&f chart is a ratio of the stock price divided by the index price. The two indices most useful for relative purposes are the Dow Industrials and the S&P500 indices. To bring the ratio number up to a chartable level, we currently multiply the resultant ratio by 10,000 for Dow relative charts and 1,000 for S&P500 relative charts.

There are several methods for determining the price objective on a point & figure chart, the most popular is the vertical count method. This is a mathematical calculation applied to all new p&f signals that provides a good ball-park figure of what could be achieved from that signal. A quick risk reward ratio of any buy signal can be calculated by comparing the price objective to the stop loss level (below the prior down column for a p&f buy).

We would also suggest studying areas of overhead resistance and looking for the bearish resistance line when considering the likely upside potential for a stock.


US Sentiment holds the key
The Advisors Sentiment Survey continues to provide advance warning of major market turning points.
The analysis and data regularly feature in the international financial press as a key indicator of market reversion.
Examples of these articles can be found on Barrons, NY Times, and Investor's Business Daily.
Want to know more?  Click here  - and you can subscribe for just $335 annually.
Historic Advisors’ Sentiment data since 1963 is also available; please contact us for further details.
US Stocks/Market Timing Combo
"This is an exceptional service and should be in every traders toolbox.
Thank you for the great service!" C.C.
Free Research
To receive occasional free research material please follow the links below to sign up.
Existing users: Click here
Others Click here to subscribe now.
Our Services
Investors Intelligence is a leading independent provider of research and technical analysis of stocks, currencies, commodities and financial futures.
Read more, and trial our services below:
US Stocks
US Market Timing
US Advisors Sentiment
UK Stocks
Regional Stocks
Global Macro Trends