Understanding the concepts of support and resistance is vital in developing a disciplined trading strategy. Prices are dynamic, reflecting the continuing change in the balance between supply and demand. By identifying the price levels at which these balances change we can plan not only the price level at which to purchase but also the level at which we can subsequently sell (and vice versa for a short trade). Whilst these levels may be created by the markets subconsciously they represent the collective opinions of the participants in the markets.

Support represents the level at which buying pressure is strong enough to absorb and overcome the selling pressure. At price support levels buyers step into the market mopping up the imbalance between supply (sellers) and demand (buyers) and when this happens the price will halt its decline and will potentially rise.

Resistance is the opposite of support and is the level at which the volume of selling (supply) outweighs the volume of buying (demand). These mini-levels can change frequently but over time a clear pattern emerges and firm levels become established. 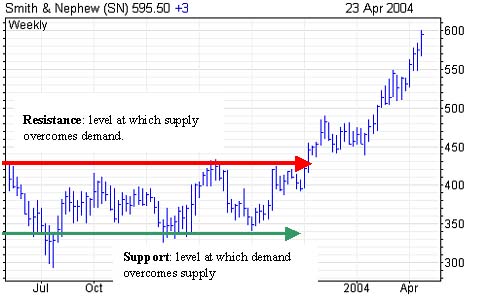 The above chart clearly shows the sideways trading range in Smith & Nephew during 2003.

The above scenario describes a sideways trading range. However, market conditions change (it may be due to improvements in the earnings estimates for a stock, a newly released crop report for a commodity or economic data for a currency or bond).

Let’s say, for example, that market conditions improve. This will alter the balance between supply and demand. The bears (the supply or sellers) will be less keen to sell and will generally become less pessimistic. The bulls (the demand or the buyers) will be more keen to add to positions. The next time the price approaches the previous level of resistance, there will be less bears than before and prices will push above the previous resistance and, possibly, mark the start of a ‘break out’ into a new trend.

Not all the bulls and bears will have changed their opinion. This is because most investment related news is open to personal interpretation and of course, not all investors may have spotted it in the first place. It is the reaction of the investors who didn’t change their view at the time that will establish a new trend : 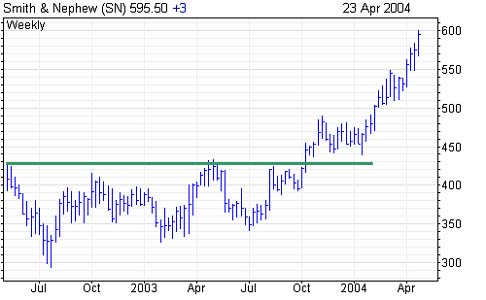 Looking at the above chart, notice how the resistance at around 430p was broken in October 2003. Also notice how this level became the new support and that the price has developed a persistent uptrend.

Conditions for a new level of Support

This is where it gets interesting. The previous level of resistance will now become a level of support. This is because not everyone got the chance to act immediately that the price broke resistance; some people may have decided to monitor the situation for a while, others may simply have not been watching.

They will have seen the price jump ahead strongly after breaking resistance and many will be buyers if the price retraces to this level: the short sellers who put on a position just below resistance (this strategy had worked for them several times before so they may have upped the stakes) will want to cover with a small loss if the price gets back to this level – this exposes market ‘fear’.Traders who had been long but taken profits at resistance will want to re-join the party and purchase as near to where they previously sold as possible – exposing market ‘greed’.

Apart from a new level of support developing from prior resistance as discussed above, there will also be a new level at which the buyers want to take profits i.e. a new resistance level will develop as earlier buyers reach their targets and start to sell. This action is the first stage in the development of successive higher support and higher resistance levels which brings us to the Concept of Trend.