Momentum indicators are used to monitor the underlying "health" of a particular trend. They do this through a variety measurements and most commonly by assessing the rate at which a stock or financial instrument is advancing or declining.

Changes in the rate of advance/decline are useful in determining the level of investor enthusiasm: for example, an uptrend “losing momentum” suggests investors are no longer prepared to buy as much stock at current prices demand pull had run out of steam and we could reasonably expect a period of consolidation before enthusiasm returns.

It is calculated by measuring the ratio of average price gains against average price losses over a specific rolling period. We have set our default period at 14 days as recommended by Wells Wilder but this can be varied to suit particular stocks or futures.

The RSI is an oscillator that ranges between 0 and 100. There are two main signals that can be generated from this indicator:

Using top and bottom signals in the RSI and trading out of the stock when the RSI turned down from above 70 and repurchasing when it turned up from below 30 would have been beneficial in this case – see red and green circles.

This strategy would have enabled the technician to dodge some fairly sharp pull-backs which are marked with red arrows.

One point to make is that one should put this indicator into perspective: the fact that it has risen above 70 cannot be construed as entirely bearish, rather it is telling us that the security is making consistently higher closes - a sign of strength. I like to think of the basic "overbought" signal as more of a warning that there is, in the short term, a higher probability of a pull-back or profit-taking rather than a sell signal. The RSI divergence signal below has greater longer term consequences for trend.

Prices usually correct and move in the direction of the RSI. In this case, the RSI is acting as a leading rather than a lagging indicator giving early indication of future price movement.

The example below shows Antofagasta, the UK Mining stock in 2004. The price makes a new high in early March but this high is not confirmed by the RSI indicator which makes lower highs. 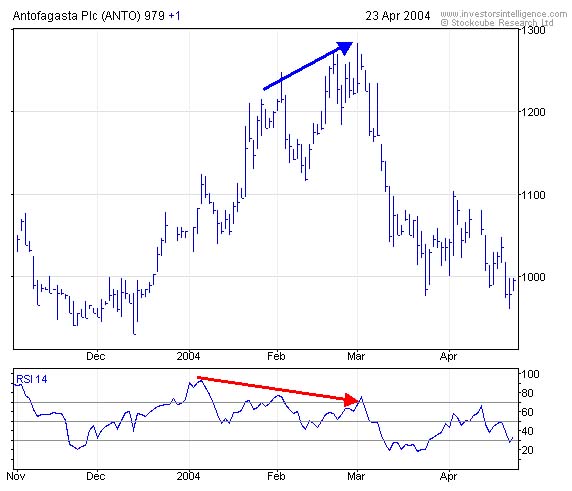 The above signal has much more significance than the basic "overbought" signal as it is suggesting that on each successive higher peak in the Antofagasta share price (in Jan, Feb, and March) the underlying "health" of the uptrend is deteriorating as depicted by the lower peaks in the RSI indicator.

The stochastic indicator was developed by George C. Lane in the 1950’s. It measures the position of a price within its range over a specified time period using the closing price relative to the high and low prices over a period.

It is expressed as an oscillator and signals are somewhat similar to the RSI as one can use both overbought/oversold and divergence. What differentiates the stochastic indicator from the RSI is that the stochastic uses a moving average as a signal trigger.

The main stochastic line is known as %K, and is calculated over a specified number of days (default is 9). A short term moving average (default 3) is applied to %K and this timing line is known as %D. As you will see from the momentum settings screen, there is a third variable which is used to “slow” or smooth the %K line by displaying it as a moving average. (Our default is 3).

We have used the stock example as for the RSI. Note that in this case the stochastic sell was generated before the RSI. 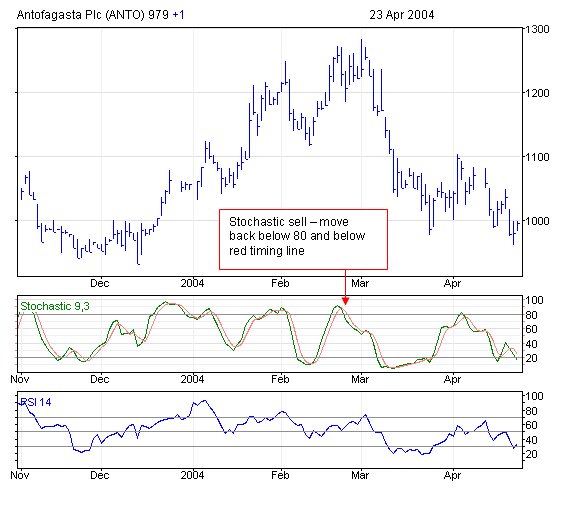 The MACD was developed by Gerald Appel and set out in his book “The Moving Average Convergence Divergence Trading Method”.

The MACD indicator is the difference between two exponential moving averages (12 and 26 as default) and also has a signal trigger or timing line (9 day ema as default).

When values of the MACD indicator move above the zero level, it is similar to a moving average crossover signal described previously to identify uptrends.

However, many investors do not wait for the indicator to move above zero as a buy signal but instead look for divergence i.e. for the price to make a lower low and the MACD to make a higher low.

A signal line in the form of a short term moving average (red line) is applied to the MACD which to provide the actual signal.

The example below shows Bae Systems, the UK defence contractor, which has recently made new multi-year highs. However, notice how the MACD does not confirm these highs (i.e. makes a lower high) providing potentially a good early indication of a trend change – the actual signal will be generated when the MACD (blue line) crosses below the signal line (red line). 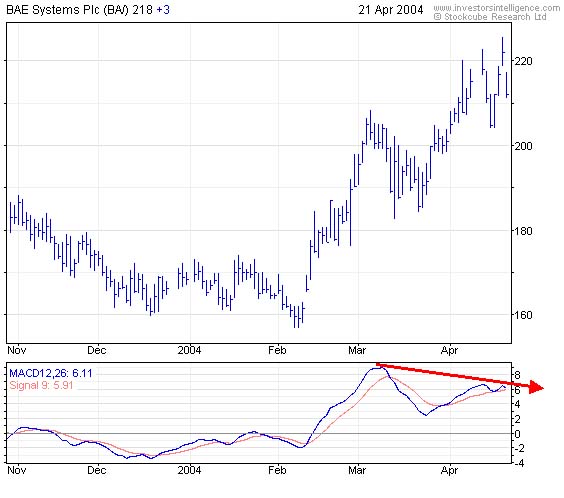