The relative indicator (not to be confused with the “Relative Strength Index” which is a momentum indicator) compares the performance of a particular stock against that of a relevant index. It is displayed as a ratio by dividing the stock price by the index price.

Traditionally it is used to determine how the stock is performing relative to the local stock market index of which it forms a part or relative to its industry or sector. It is part of a good investment discipline to check that our portfolio holdings are outperforming their local indices.

The relative indicator can also be used to help judge the likely reaction to a major level of support or resistance. For example, let’s look at Rio Tinto (RIO) the UK mining stock. The stock has remained in a major five year medium term sideways range. However, the relative indicator (lower chart) confirms that this was, in fact, a very tradable range. Let’s go through three periods on the chart. 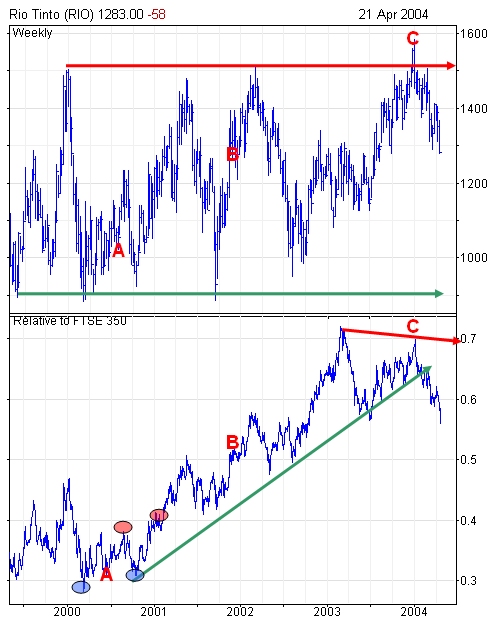 Point A: We have marked the highs/lows on the relative chart to highlight the “relative base” that developed in late 2001.

This suggests that moves down to support at 900p were less than falls in the market around this time i.e. selling pressure was less for this stock than for the market and sentiment was improving.

Point C: the stock price makes a new five year high ! an event normally considered as very bullish but the relative has not made a new high suggesting that investors are no longer buying this stock with the same vigour compared to other stocks in the index. This suggests that sentiment is waning and a time to take some well earned profits.